For Wyman, the weekend was hindered in part by a lingering injury from a motocross accident the weekend before, where he sustained two broken ribs. The Superbiker fought through to match his best qualifying result of the season, 7th, on Saturday morning before race one. 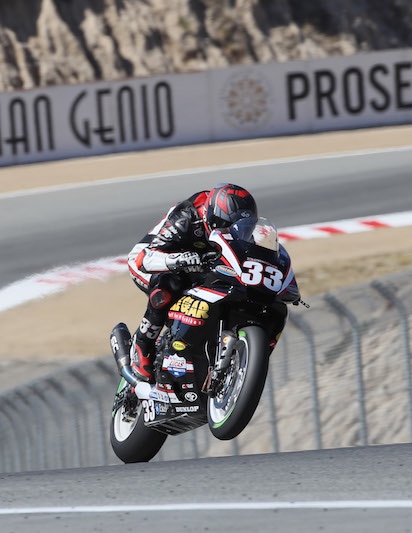 “Our approach for this weekend was to keep things simple with the bike,” Wyman said. “Road America was a struggle, so we put together a much better plan for Laguna and things were working well for us. I had a great qualifying lap that put us in 7th.”

“As for the ribs, I was just trying not to think about it since there’s nothing you can do for them. On any given day all of us riders on the grid are having to grit our teeth and ride through something, some sort of physical setback. It’s just part of our sport. I’m sure I wasn’t the only one.”

Wyman got a great start in the first race and found himself in 4th place into turn one, but was quickly swallowed up after struggling with rear grip on his Cycle Gear/KWR Yamaha. He dropped to 9th place and rode a lonely 23 laps in for the checkers. 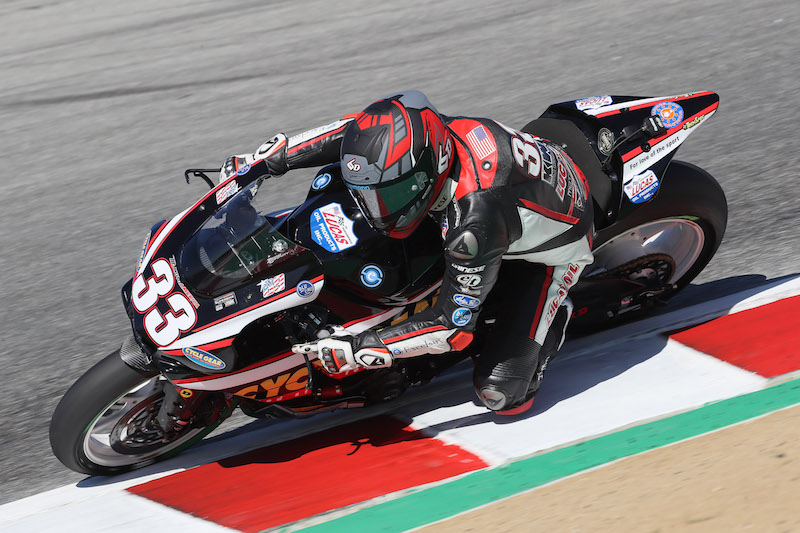 “It was probably the worst I felt all year,” Wyman added. “Ever since the new tire was introduced at Road America, a lot of the teams have been struggling, and we’ve seen a lot of guys crashing because of it. I haven’t crashed, personally, and I’d like to keep it that way. I’m not willing to stick my neck out there and throw it down the road when the bike isn’t right. Maybe this can hurt me in some cases but I’d rather finish, collect some data and give ourselves the best chance to improve for the future. I was physically smoked trying to ride the bike as it was sliding around so much.”

After his 9th place finish, the KWR team made adjustments to the geometry and his K-Tech Suspension for the morning warm-up. Wyman clicked off his quickest race-tire time that morning, and did it with ease.

In race two Wyman had another good start – up to 5th spot on the first lap. He was shuffled back to 9th, but was able to fight forward to climb back up to 7th. A positive result in race two for the KWR team proves they are back on the right path. 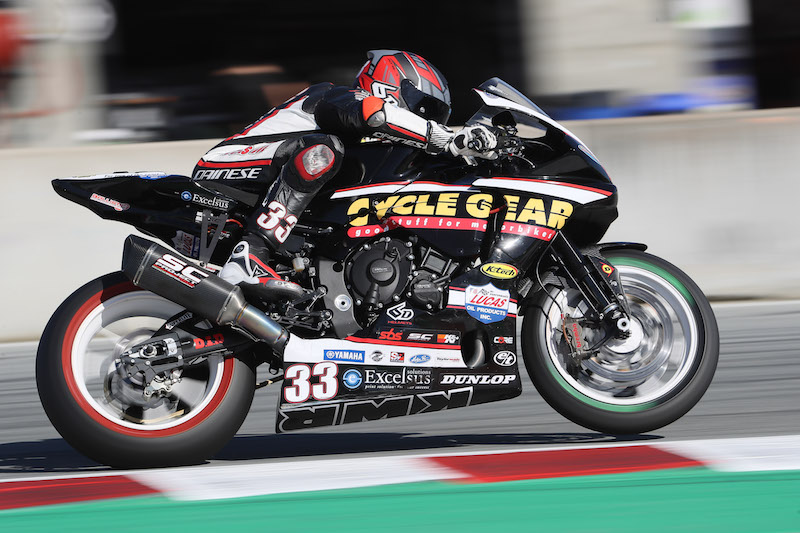 “It just feels good to have made a step forward with the bike,” Wyman said. “In race two it was so much easier to ride, so I know the direction we went with the bike was the correct one. It’s crazy though, the things that are working with this new tire size are a lot different than what we’ve used in the past. I think now that we have a direction in the bike setup that we know works, we can go another step in that way and be back fighting for the podium at Utah.”

Next up on Wyman’s calendar is something a bit different from racing motorcycles. Kyle Wyman will marry his fiancée and beIN Sports Pit Reporter Hannah Lopa on July 7th, 2018 before the sixth round of the MotoAmerica championship.

“Next up for me is to go get hitched,” Wyman said. “I’m super excited to get married, we have this month break in between rounds and we couldn’t have picked a better time. I’ll be back at Utah as a married man and look forward to what’s in store for my future on and off the track.”

The next round of the MotoAmerica championship is at Utah Motorsports Campus in Tooele, Utah July 20-22, 2018. Stay tuned on the @kylewyman and @kwr_sbkInstagram pages to check in on the team’s progress.

The KWR team would like to extend its gratitude to Cycle Gear, for title sponsoring the team for the Laguna Seca round. Click Here for Kyle’s Video Interview with Cycle Gear!